The best teams of 13- and 14-year-old players from around the globe compete for the world championship of the Junior Division of Little League Baseball.

As we get closer to August’s tournament, visitors will be able to track real-time information by connecting to the official website for more information. 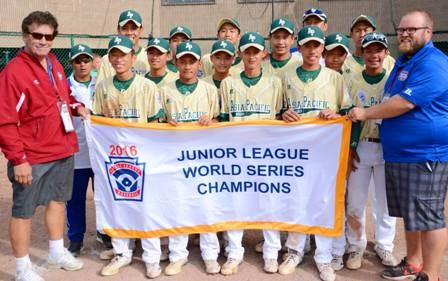 DIRECTIONS: World Series Field is located in Heritage Park, 12111 Pardee Road, Taylor, Michigan 48180. The main park entrance is on Pardee, north of Northline Road. There is a second entrance to the south on Racho Road and Northline, east of Pardee. World Series Field is at the east end of the park. Heritage Park is located a mile east of Telegraph Road (US 24) and just over a mile west of the Northline Road Exit of the I-75 Freeway.


Like the Little League World Series, the Junior League World Series has a storied history. The Junior League World Series began as a tournament for the best teams of 13-year-old players. It blossomed to include 14-year-olds and now attracts teams from around the globe: from Europe, the Middle East, Africa, Latin America, the Asia-Pacific region, Canada and, of course, the United States. To date, teams have come from 29 different states in the U.S., four Canadian provinces, Australia, Aruba, Belgium, Chinese Taipei, Curacao, Czech Republic, England, Germany, Guam, Guatemala, Indonesia, Italy, Mexico, Panama, Philippines, Poland, Puerto Rico, Russia, Saipan, Saudi Arabia, Netherlands, U.S. Virgin Islands, Ukraine and Venezuela.   A number of current or past professional baseball players played for teams in the Junior League World Series before making it as stars in the big leagues. They include Gary Sheffield, Eric Bedard, Brett Myers, brothers Jose and Javier Valentin, Erubiel Durazo, Chad Hermansen, Derek Bell, Delino DeShields, Shannon Withem, Adam Loewen and Chris Brock. Sheffield and Bell were teammates on the Belmont Heights team from Tampa, Florida, that won the Junior League world championship in 1982. Other future stars to play in Taylor have included Chris Dingman and Steve Reinprecht, Junior League teammates in 1989 with Edmonton, Alberta, who went on to play in the National Hockey League. Matt Cassel (Northridge, California, 1995) is a quarterback for the Minnesota Vikings in the National Football League. Mark “Bo” Pelini, a member of the 1981 champions from Boardman, Ohio, went on to play safety for Ohio State University’s football team and is now head football coach at the University of Nebraska. Another football star was Andy Mignery (Hamilton, Ohio, 1994), former tight end at the University of Michigan. For updates on the JLWS, flick on Facebook here.