Eureka Way! is the hottest developing business and entertainment corridor in the City of Taylor, and is noted as one of the top areas in Michigan.

Rouse Properties has invested millions of dollars in renovations to Southland, which started as one of four original J.L. Hudson's suburban mall marketplaces in the 1950s (along with Northland, Eastland and Westland).

The Trader's Point development is scheduled to begin in spring 2017 with the building of its anchor, Menards. Trader's Point is located on 80-plus acres previously occupied the Gibraltar Trade Center, which consolidated its business into its Macomb locale. 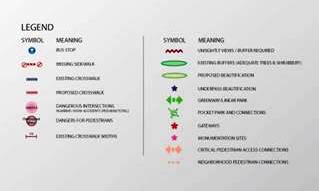 Author Allan Jacobs once wrote that "great streets are were pedestrians and drivers get along together." The City of Taylor and Wayne County would like to transfer the Eureka Way! corridor into that type of friendly thoroughfare, but there is much work to be done.

The above graphic was part of a presentation created by Wade-Trim, and calls for many of the components that would makeup a pedestrian-friendly business district along Eureka Road. Some could become reality; others might not. It all depends on future funding between Taylor, Wayne County and the Taylor Tax Increment Finance Authority (TIFA).

Focal points include beautification, east-west connectivity and increased safety (including walk-ability and bike-ability), all while adding green space and parkways. Some of this work is already being done in the first phrase of preparation for the Trader's Point development, with better roadway, infrastructure and walkways along Eureka Road. The City and county also want to create traveler-friendly bus stops -- which, for the most part, do not currently exist in that corridor.

The future of Eureka Way! can be more than just increased business opportunities. The vision would create a quality of life unseen in this corridor since its creation.


A report by the City of Taylor in early 2016 projected that new businesses and projected new businesses in the Eureka Road business, retail and entertainment district are on path to create $275 million in investments and over 1,800 new jobs. The largest contributors to the investment and job growth opportunities are Rouse Properties, the owner/operator of Southland Center, and Menards, which now owns and will coordinate development in the old Gibraltar Trade Center location.

Southland Center, unlike its other sister malls in the Detroit area, has undergone a rebirth under Rouse’s direction. Three of the original four J.L. Hudson’s Detroit-area malls – Eastland, Northland and Westland – have either failed or have experienced major difficulties. Southland, on the other hand, is flourishing. A huge addition is the Cinemark Southland Center and XD theater complex, which replaced the old Mervyn’s on the west edge of the mall. Cinemark’s high-tech movie location, the best in the region, created 54 jobs. Other additions to the mall like H&M, Pinkberry and Primanti Bros. have added to the job growth. The mall renovations and construction created approximately 200 jobs.

“Until you really analyze the details, you don’t realize the positive impact Eureka Way development is having on our community,” Mayor Rick Sollars said. “This is a very unique opportunity for us. Eureka Road, between Telegraph and Allen, is one of the hottest development areas in Michigan. Every new location adds to our tax base, offers our residents new choices and expands job opportunities.”

But Southland and Menards' Trader's Pointe, while huge developments, are not the only story in the corridor. Many new sites have already opened for business or are on the way, including the 100,000-square-foot BJ's Wholesale Club that opened in November 2019 in Trader's Pointe. Add to that BJ's Restaurant and Brewhouse; Wahlburgers; Art Van Pure Sleep; Bubba’s 33; Disc Replay;Fairfield Inn & Townplace Suites; Golden Corral; Henry Ford OptimEyes; Hilton Home 2 Suites; La-Z-boy; Lumber Liquidators; Panera Bread; SkyZone; Heritage Park Senior Village; T.J. Maxx; The Vitamin Shoppe; and World Gym are just some of the businesses that have either located or are planning to locate on or near Eureka Road. That doesn’t count the expansions or revisions: Wendy’s, Taco Bell, McDonald’s, Hooter’s and PetSmart all remodeled or rebuilt; Starbucks relocated and expanded in the Meijer out lot.

“What is happening on Eureka Road is not just good for those on Eureka Road or nearby, but for the entire community,” Mayor Sollars said. Stay tuned for more because the landscape just keeps changing.
Parks &
Recreation
Dine Out
Shop Taylor
Events
Places to Explore
Government Websites by CivicPlus®
[]