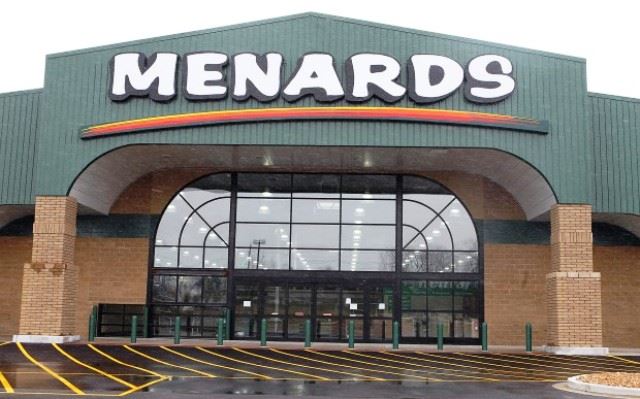 Menards opened in June 2018, the anchor of new 83-acre Trader’s Pointe development near Eureka Road and the I-75. Trader’s Pointe, the largest development in the City since the construction of Southland Mall in the 1960s, will eventually include at least two other major “big box” retailers and many other restaurants and smaller businesses.

"We're super excited," Mayor Rick Sollars said during a brief ceremony on June 25. "I know you guys (at Menards) said you were excited to be here, but the whole City of Taylor and the Downriver area are excited to have you here."

In a ceremony unique to Menards, the company had a two-by-four signed by the various officials on hand and then cut in half by Mayor Sollars -- a cutting of the "ribbon," so to speak. The two-by-four will eventually be displayed inside the store.

Menards, a huge 250,000-square-foot facility on the southern-most end of what is now the development, began planning the site as long ago as 2014. Since the release that Menards would locate in Taylor came so early, many people in the area became impatience waiting for the eventual build out and opening.  The parcel was the former home of the Gibraltar Trade Center, which closed and merged with its sister location in Macomb.

The City of Taylor invested in a large traffic study in support of the plan, and Wayne County and Taylor have coordinated efforts to improve Eureka Road. It was repaved from Racho to Allen, and sidewalks were added, along with new traffic signals and other pedestrian-friendly features. The City/county partnership plans to totally renovate and partially enclose the Frank & Poet Drain, along with adding streetscape amenities, in the future.

Menards' General Manager Chris Fisher remarked that everyone on staff had been "busting tail for seven weeks to get ready" to open. Assistant Operations Manager Dave Harrington remarked that the facility was Menards' "biggest, newest prototype store" and the first of its kind in Michigan. 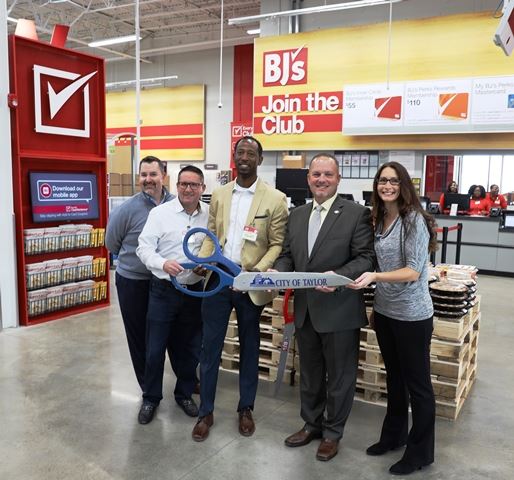 BJ’s Wholesale Club became the second big-box retailer to open in the Trader’s Pointe development at Eureka Road and I-75, joining the anchor store, Menards. BJ’s opened last month to long lines of happy customers lined up around its building and vehicles waiting to turn into its parking lot, which was full. Before the store even opened, BJ’s sold 18,000 memberships.

“It’s a tremendous facility, just what shoppers in this region are seeking,” said Mayor Rick Sollars. “It adds jobs to Taylor, giving customers what they seek, adding to our tax base and quality of life.”

BJ’s built its nearly 100,000-square-foot Taylor location on a large parcel directly north of the Menards’ site, which is located in the southern portion of the development. BJ’s backs directly to Racho Road along the west side of Trader’s Pointe. Plans call for another large big-box retailer to eventually build in Trader’s Pointe. Smaller retailers and restaurant are planned closer to Eureka Road.

Earlier this fall, BJ’s opened its first Michigan location in Madison Heights. Taylor is its second site in the state, with a third planned in the Chesterfield Town Center sometime in 2020. BJ’s is a membership-based wholesaler along the lines of Costco and Sam’s Club. Based in Westborough, Mass., it has over 200 stores with the large majority on the East Coast.

In a shopping comparison of membership-based wholesalers, “frugal shopping expert” Laurn Greutman wrote for CNBC that she would highly recommend BJ’s for products like baby supplies, coffee, dairy products, fresh meat, laundry detergent, propane, paper products, spices and baking supplies. BJ’s also offers a large fueling station in its out lot, and online shoppers stated that drivers could save up to 40 cents per gallon there.

With $12.7 billion in annual sales, BJ's is part of a $225.5 billion warehouse club industry, according to the 2019 U.S. Warehouse Club Industry Guide by Research and Markets.