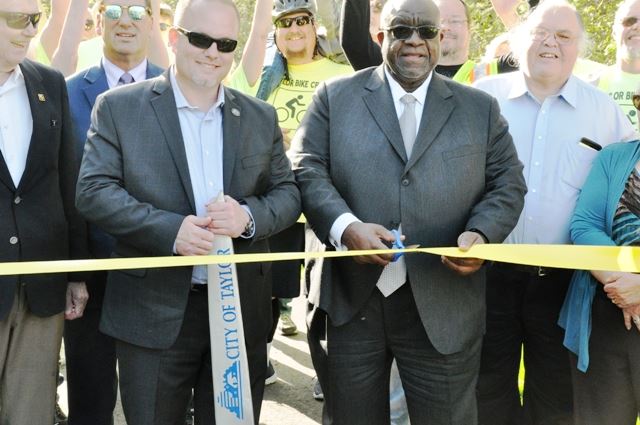 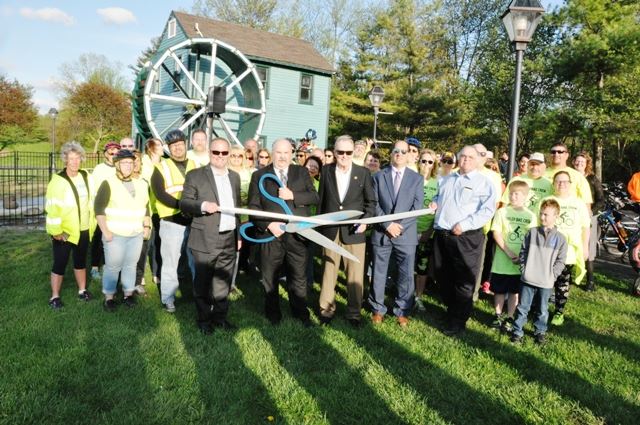 Slowly but surely, “The Vision” is coming together.

In early may, the City of Taylor and Wayne County Community College District joined hands to dedicate a pair of projects in and around Heritage Park. Joined en masse by other key officials, residents and a huge contingent from the Taylor Bike Crew, a pair of brief ceremonies dedicated the now connected walking/jogging/cycling pathway near the MIPSE Building in the far back of the WCCCD Downriver Campus and the newly motorized and lighted waterwheel at Coan Lake.

The pathway was finished last fall and connects the Heritage Park pathway network with the campus network of pathways, sidewalks and parking lots. The pathway connector is a key component in what will be called The Fletcher Discovery Trail, a series of non-motorized pathways connecting the Midtown Goddard area with the park, the campus, Racho Road, a new park near Superior and Pardee and points south (Eureka Road) and west (Telegraph Road).

WCCCD Chancellor Dr. Curtis Ivory attended the pathway ceremony and lauded the cooperation between the college district and the City, and the improvements being made in Taylor. Mayor Rick Sollars echoed those comments, specifically pointing out the great partnership with Dr. Ivory and with Downriver campus President Tony Arminiak.

Both projects have created improved Heritage Park. In fact, WCCCD Campus Police have joined in a partnership with Taylor Police to patrol the facility. Park goers often see WCCCD security vehicles, and officers do a tremendous job of not only security, but public relations. As a direct result, the park is safer and cleaner than it has been in many years.

The waterwheel at Coan Lake, located at the Ecology Center, had been dormant for some time. Used in its non-motorized state, it often rotated too quickly, due to the weight of the water it carried, and was a safety hazard.

WCCCD Trustee Charles Paddock and Ecology Club Director Dennis O'Connell were key leaders in the waterwheel campaign. O'Connell talked at length during the dedication of the importance of the waterwheel to the ecosystem of Coan Lake. Discussions between the City and WCCCD eventually opened up the possibility of lighting the waterwheel, similar to a Ferris wheel. WCCCD was able to offer the City a grant that, combined with other funds, was able to accomplish both lighting the wheel in a decorative fashion and motorizing its operation.

The computer-driven lighting can be programmed ways to offer shows and effects during special events and times of the year. From an environmental standpoint, having the waterwheel functioning, along with the new water fountains in Coan Lake greatly enhance the fishery's ecosystem.

Five years ago, Coan Lake had both fishery and water quality problems. The fishery was infested with large Carp, much too large for the ecosystem the size of the three-acre pond. They killed off the smaller fish and ate away much of the food chain. In addition, the oxygenation level of the water was low, thanks to factors that included a lack of water movement.

It does not help that the only feeder to Coan Lake is a sulfur spring. That spring is usually turned off, because it causes the water to smell badly. The pond has been restocked with fish species more conducive to the size and depth of the pond. The water is cleaner, with higher oxygenation levels. And the City has installed newer, better fountains inside to help in the oxygenation process. The motorized waterwheel will aid that effort.

"I am so grateful for the work that has led us to this stage, which is working to establish greater connectivity for our residents and visitors in environmentally friendly ways,” State Rep. Erika Geiss said. “Restoring and bringing the waterwheel back on line brings the true splendor of this jewel back to life.

“While enjoying the beauty of the lights, we can be reminded that lake’s ecosystem is being sustained through the oxygenation of the water. It’s has the added bonus of aiding in keeping our mosquito population down. I look forward to the continuation of this project. It is the start of something wonderful."